SCAMS - HOW TO REPORT THEM

SCAM ALERT ! Recent door to door solicitations by Reliance Security Systems, out of Vancouver ARE A SCAM! Notice from Pennywise provides a number to report scams - 1 888 495-8501, also a website www.antifraudcentre.ca

HAFI - Home Adaptations for Independence:  BC Housing provides financial assistance for persons who need to make adaptations in their homes such as handrails, ramps, walk-in showers.

A pamphlet from HAFI is on its way. As soon as we receive it, we will post on our site.

"Getting It Right for Seniors in BC"

BC Ombudsperson Kim Carter is visiting  Nelson & Castlegar & Nelson  September 12 & 13 to present her findings re improving seniors' care in BC,  with special reference to the West Kootenay area. Those organizing her visit to the area have scheduled events both Nelson & Castlegar at  different times of the day in the hope that as many people as possible will be able to hear her important recommendations for change.

In Nelson, she will speak on Wednesday, September 12 at 7pm in the Nelson United Church Hall, 602 Silica Street.

The following day, on Thursday, September 13 she'll make a similar presentation in Castlegar from 12 noon to 2pm at the Castlegar Recreation Centre, 2101 6th Avenue. An optional lunch, by donation, will be available at 11:30 am.

Both presentations are free of charge.

The BC Government has been given a unique opportunity to improve the lives of seniors in the province if it follows the 176 recommendations made by Ms. Carter in her recently released report "The Best of Care: Getting it Right for Seniors in BC".

However, according to Castlegar Health Watch member & event organizer, Bud Godderis, "The government needs encouragement to fully implement the Report's recommendations. The public is encouraged to come out to meet the BC Ombudsperson, learn about her Report and find out what concerned citizens can to to urge immediate government action."

To read the full Report go to www.bcombudsperson.bc.ca

For a 14 page summary of the Report go to www.bchealthcoalition.ca 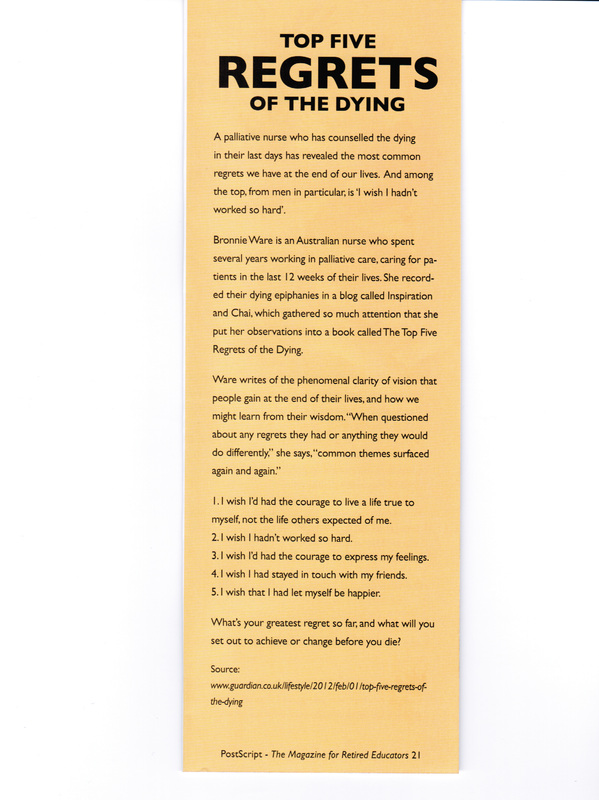 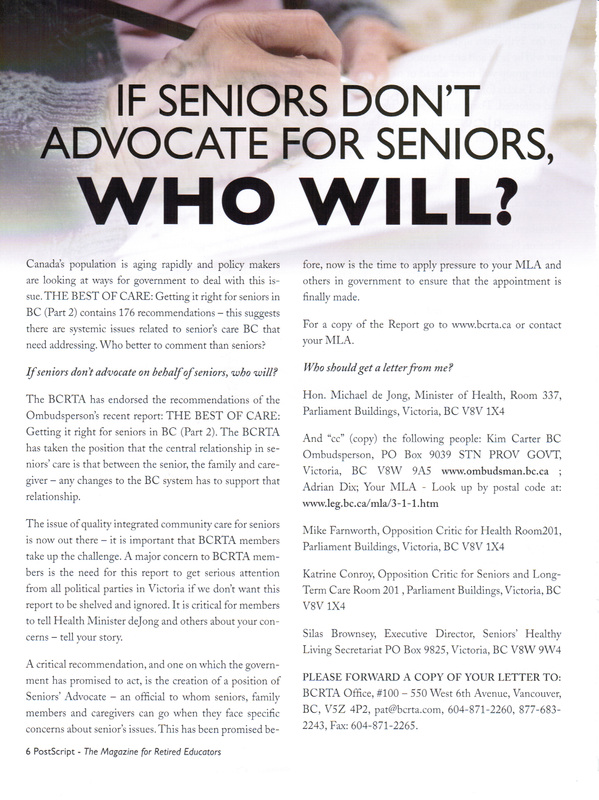 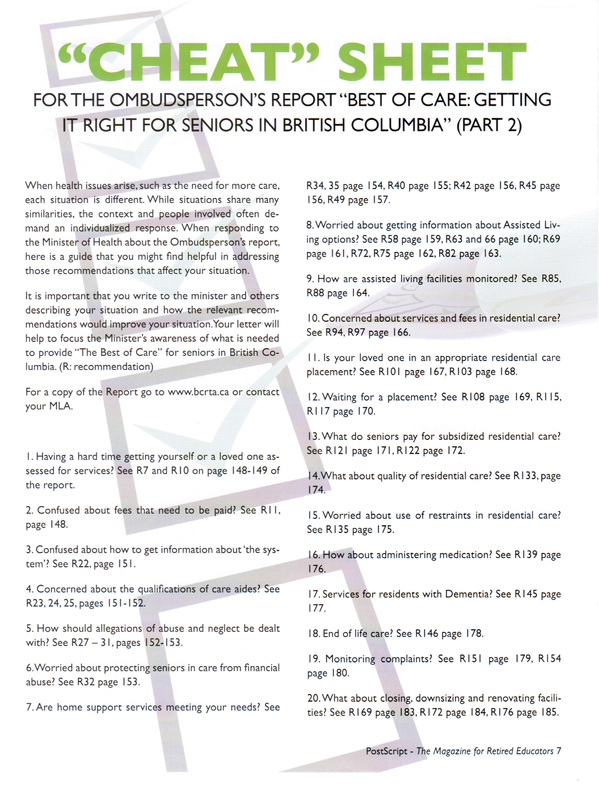 Reproduced with permission from: PostScript - The Magazine for Retired Educators

The Ombudsperson,, Kim Carter, will be coming to the West Kootenays in September. She will be in Nelson the night of September 12th and in Castlegar for a lunch time presentation (about 2 hours duration) on Sept 13th. Both presentations are for the general public.  Stay tuned for more details to come ... check our Events page regularly for further details regarding times, etc.

BC Health Coalition: A Roadmap to Better Seniors' Care in BC: A summary of the BC Ombudsperson's Report on Seniors' Care:  Please click on the link to read this report. Posted July 31st/12 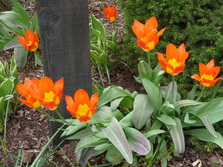 April 29, 2012 SPCS 6th Annual AGM TRAIL BC
SPCS held its 6th annual AGM on Sunday April 29th in Trail, BC. Routine AGM business was conducted, along with a presentation by a guest speaker from Vancouver, Mr David Hurford of the BC Care Providers Association. At the end of the meeting a new Executive was elected.
Mr Hurford spoke on the topic of The Future of Seniors' Care in BC. He stressed that seniors' health care issues are not unique to Trail, the Kootenays or BC.  They are happening in every town, in every province & territory in Canada and in the world for that matter.  He said that Statistics Canada will soon be releasing its Report on Aging based on our 2011 census. It is widely reported that this Report will most likely "jolt" us all into reality as to what we are dealing with here in Canada as far as seniors' care is concerned.
He believes that a MUST READ report for all of us, even at 500 pages, is BC Ombudsperson Kim Carter's Report on Seniors' Care, released in February 2012. This report exposes, among other things, severe systemic funding inequities, while making the clearest case yet, that the challenges of our aging society are no longer left to the future. They are already here with us today. He also spoke about how employers who provide senior care services need to have a "culture shift" -- that starts to see that seniors' care is an entitlement and your birthright as a Canadian senior, as well as the fact that you are going to be managing your own entitlement. NOT vice-versa. In his closing remarks his message to our organization: "Don't stop. Keep up your very good work and keep on going."

Our guest speaker David Hurforth referred to the importance of the recent Ombudsperson's report on Seniors' Care so remember to put this date on your calendar now: At Castlegar Health Watch'’s invitation and Trail SPCS's assistance, the Omobudsperson will be coming to Castlegar to address a public meeting about her reports on Senior Care on THURSDAY September 13th.  We  encourage many to attend and are offering  transportation if needed. This will be an afternoon meeting so that as many seniors as possible can attend and get back home during daylight hours. The time will probably be 1 Pm at the Castlegar Complex but that will be confirmed closer to the date.

SPEAKER PROFILE:
David Hurford, Director of PR + Member Services
BC Care Providers Association (BCCPA)Vancouver, BC
The BC Care Providers Association (BCCPA) has been serving private and non-profit care providers for over 30 years. In addition to employing more than 7,000 British Columbians, BCCPA members care for over 10,000 seniors each day in residential care and an additional 4,000 each year through home support.
Link:  http://www.bccare.ca 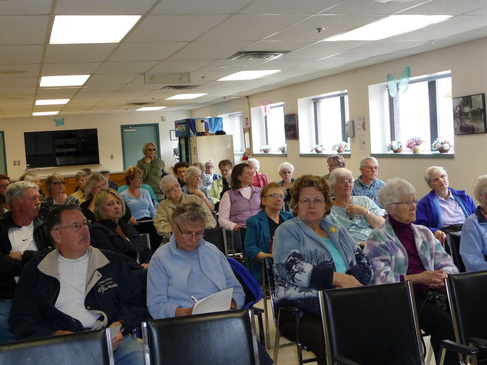 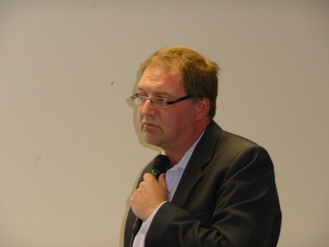 David Hurford of BC Care Providers Association to SPCS: "KEEP ON GOING." 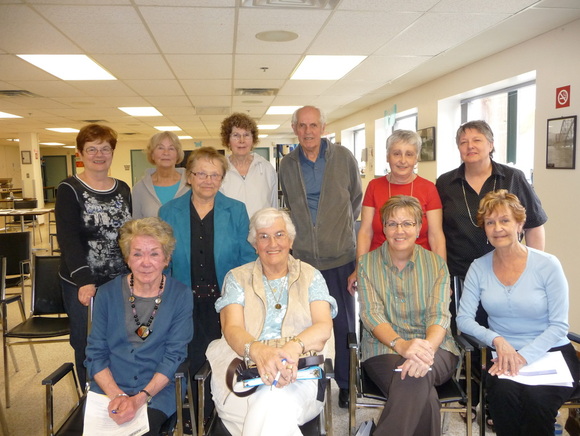 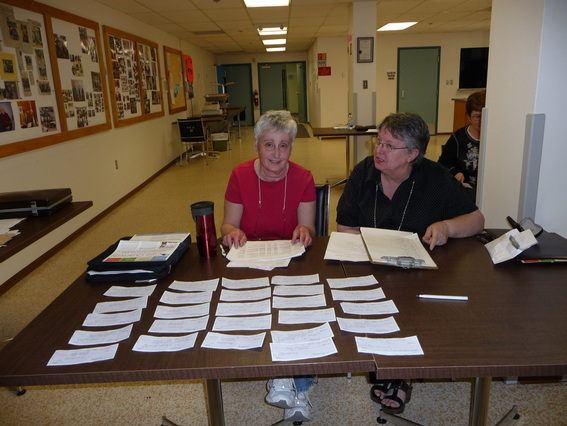 Working hard to make it all happen! 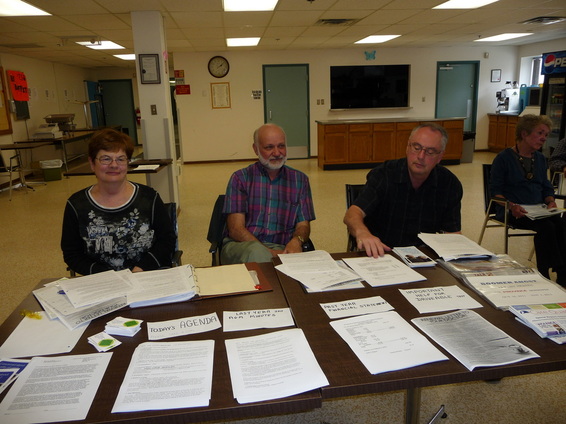 The Editor, The Trail Times

Nidus has followed the dialogue in the Trail Times between Bud Godderis and Philip Kanigan with some interest, not least because it reflects the kind of dialogue that characterized the development of the Representation Agreement in the 1990’s.

The grassroots process that brought about this unique legislation was supported by the Notary Society of British Columbia, along with many other stakeholders including seniors groups.

While Mr. Kanigan is well placed to advise on the particular skills of notaries and their legal cousins, Mr. Godderis is correct in his description of the Representation Agreement as a legal tool that was particularly designed to be people friendly. The legislation does not require legal consultation, which can be a barrier for many people and Nidus has developed a wealth of self help information to enable the best practice for do it yourself agreements.

As Mr. Godderis points out, personal planning is about maintaining control of your life and avoiding the need for guardianship. The intent of the Representation Agreement Act is to ensure that the legal tool does not belong to the legal profession but is widely accessible to everyone.

Report: Trends & Changes in West Kootenay BC Regional Health Care Services 2002 to 2010
Courtesy of Sally Williams and Connected Communites - West Kootenays BC
Made available February 2012
SPCS Trends and changes in WK health care services 2002-2010.pdf
Sally Williams of Castlegar's Health Watch and the executive of your SPCS have worked hard to print and release Sally's detailed report on Health Services lost in the Kootenays since 2002.  We will have a press release soon and a list of where your friends can read a copy. 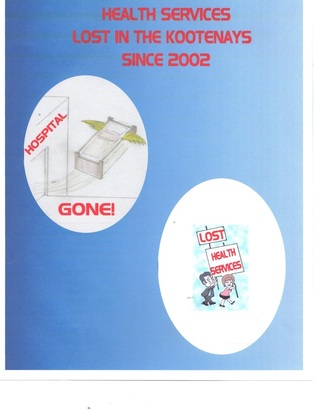 The letter below, went into the Castlegar News this week and will be sent to the Trail Times and Rossland News.  We all need to be aware of and use this available and important service:

January 20, 2012
Dear Editor;
Planning for the future, especially anticipating one’s own incapacity or death, is difficult and something many of us postpone or try to ignore. With that in mind, I am writing to remind your readers of how important it is for them to take the necessary steps to assign someone as their representative in the event that their mental competency deteriorates or is being called into question. This can happen to people of any age and in any number of situations including through a stroke, dementia or serious accident. In BC, if you are 19 years of age or older, no-one has automatic authority to act on your behalf if you are considered incapable – not even those closest to you - your spouse, parents or children. And contrary to popular belief, an enduring power of attorney is not all you need to have in place for these situations. It can only assign control re financial matters, but not with respect to decisions around personal care, health care, end of life decisions and so on. Adults who do not have representation decisions in place are vulnerable to adult guardianship (now called “committeeship”) which is a very expensive court process. If this happens, you can lose your civil rights and legally you become a non-person. Through a Representation Agreement, you can avoid “committeeship” by giving legal authority to speak and make decisions on your behalf to people you know and trust. This way you can stay in control should you become incapable or incompetent to look after yourself.  The government does not have to be involved and family or friends will have legal authority to carry out your wishes. The legislation governing Representation Agreements is such that an expensive lawyer or notary public does not have to be involved. Nidus, a BC based, non-profit agency, has been created to help guide individuals through the process of drawing up and formalizing this legal document with minimal cost. In this letter I can only outline the “barebones” of why a Representations Agreement is so important. You can find out much more, including how to create a Representation Agreement and accessing relevant forms, by going to the website www.nidus.ca. If you are not computer literate and need help with this, please contact me at 250-365-5077. There are several volunteers in the Castlegar-Trail area, including myself, who are willing to assist people wanting to learn more. Yours sincerely,
Bud Godderis, Nidus Volunteer
Castlegar, BC